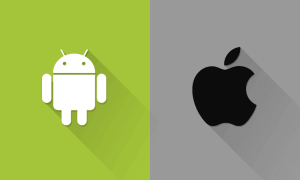 A native app is an application for your smartphone developed specifically     for a particular mobile operating system (like Swift or Objective-C for iOS     and Java for Android). Because the app has been developed within a        developed ecosystem which has been followed by the user experience and  technical guidelines of the OS (for example swipes, app defined gestures,  centrally aligned header on iOS, left aligned header on Android, etc.), not only does it have the advantage of more efficient performance but it also "feels right". Feeling right means that the interactions that happens within the app has a look and feel that is consistent with many of the other native apps that are present on the device. The end user is therefore more likely to adapt to navigating and using the app faster. Finally, native applications have the major benefit of being able to access with ease and use the capabilities built in the device (for example, address book, GPS, camera, etc.). When a user takes pictures, makes a call, sends text messages using the built-in apps in the device, sets reminders, or uses the music app that came installed in the app, they are using the native apps. Basically, native apps are just that, they are native to the user's operating system and thus built as per those guidelines.

Hybrid applications are, in essence, websites that have been packaged into a native wrapper. They appear and feel like a native app, but are essentially beyond the basic frame of the app (normally limited to the navigational elements/controls) and they are powered by a company's website. A hybrid app is a basically a web app that has been built using JavaScript and HTML5, that has been wrapped up in a native container which can load most of the information on the page as the user navigates through the app

There may be few basics that should be asked so as to get the right answer.

Is it time to market or do it perfect?

Typically, when a company decides to build a mobile app, they are either playing catch up with their competitors,
or have identified a business opportunity previously untapped. Whatever the reason, executives want the application
built out and released ASAP. However, as most people know, ASAP often means many compromises need to be made
as well making decisions on the fly. Both hybrid and native approaches can get the job done but there are certain
considerations that should be understood right off the bat.If a company can wait few months or more before the app is launched, a native approach makes the most sense.Native applications have the best performance, highest security, and best user experience.

Do you want to use native features in the Mobile App?

If your app is heavy on native phone capability and this is your primary USP, then native app development will work best.While building a Hybrid Mobile App, depending on the framework that you adopt (there are several in the market), you may or may not have access to native features. Some of these native features can be the Camera, Contacts, SMS, Hardware Device Buttons, Map, Push Notification. However, it doesn't mean that these features can be accessed only in a native app. Some of these features can be used in a hybrid app by pulling the native components separately.

Do you have seperate budget for different platforms?

If you have good budget and you can have some leverage on time we would suggest to go with native development.
And these days due availability of resources development cost for native has dropped as compared to that in past.

Do you want to have the best user experience? yes!

Even the most fans of hybrid applications are forced to admit that native applications win the war in performance.A native app is faster and more reliable by its very design. As users navigate a native mobile app, the contents, structure, and visual elements are already on their phone, available for instant loading, and thereby providing a seamless experience.In contrast, a hybrid app has only a wrapper that is downloaded to the user's phone (which may or may not contain all the navigational elements) with most of the data being loaded from the server.

The only time you should consider using a hybrid app.

If you have less than four months to develop an app, and you want to test a limited private market on the viability of your app, then use Hybrid. If the test works, then move to native as soon as you can and show it to the world. If it doesn't work, you've saved yourself time and money.